The new liveried Dublin International Chamber Music Festival is proud to present the world première of Gráinne Mulvey’s Great Women, a work specially commissioned by the Festival with funds from The Arts Council and which has given our second day its focus on women composers and performers.

Performed by soprano Elizabeth Hilliard, a champion of the composer’s work, Great Women is a celebration of the strong, remarkable Irish women who have helped shape the social and political landscape through their striving for equality and liberation. Amongst those whose words are set are pioneering patriots, Countess Markievicz and Rosie Hackett, alongside such equally inspiring contemporary figures as our former Presidents Mary Robinson and Mary McAleese. 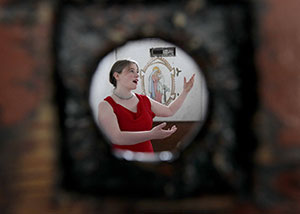 The Dublin International Chamber Music Festival is delighted to present the launch of the CD “Great Women” on Friday, 18 June 2021, at 7.30pm. Great Women is being released on the Métier/Divine Art Recordings Group label (MDS29007), and is a celebration of strong, remarkable Irish women who have helped to shape the social and political landscape of Ireland through their sustained striving for gender equality and liberation of women. Among those whose words are set in this new work are pioneering patriots such as Countess Markievicz and Rosie Hackett, alongside equally inspiring contemporary figures such as former Presidents of Ireland Mary Robinson and Mary McAleese.

“Great Women” by Gráinne Mulvey was commissioned by the Dublin International Chamber Music Festival (Great Music in Irish Houses), with funding from the The Arts Council / An Chomhairle Ealaíon. A 26-minute work, the CD recording of “Great Women” was also funded by the Arts Council of Ireland and will be officially launched by Linda O’Shea Farren, Chair of the Dublin International Chamber Music Festival. The launch will include a Panel Discussion led by Linda O’Shea Farren, in which Elizabeth Hilliard and Gráinne Mulvey will speak about their long-standing collaboration and passion for this project. We are extremely honoured to be joined on the panel by the first woman President of Ireland Mary Robinson, extracts from whose inaugural speech are embedded in the textures of the live and tape parts of this new work.

The CD launch of Great Women is supported by the Contemporary Music Centre, Ireland
Presented in association with the Office of Public Works
Supported by Culture Ireland and Avolon